Since 1981, painting for me has been a process of exploring the fundamental unity between the formal and the sensual, the interior world of ideas, feelings and the exterior world of things and processes. Form gives the painting a sense of objectivity; colour and effects invite the viewer to enter into the subtle world of the sensual.

My way of seeing was shaped by the objectivity of science and later the subjectivity of art. However science seems concerned with the world out there while art seems to explore the subjective – both use intuition and imagination in their approaches. Science and art both heighten our sense of the beauty and complexity of our surroundings.

Nature and natural patterns are the source of inspiration to be found in the majority of my work. I attempt to capture the flow of impermanence – if only for a moment.

When I earlier began exploring natural patterns by using computers the images were beautiful in an elegant way. In my later explorations of random paint effects like  splashing and spattering, I discovered that magic mixture of order and randomness found everywhere in Nature. Both these elements inform my work.

I am drawn to Japanese Aesthetics which are rooted in Nature; also the insights of Zen. The Japanese have a term “wabi-sabi” that suggests qualities such as impermanence, asymmetry and imperfection and I find beauty in these things: rusting metal, tangled weeds, old wood, things rustic and the sky at night. 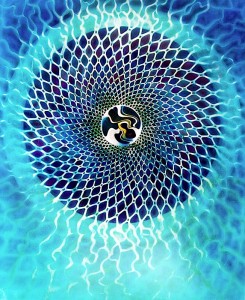